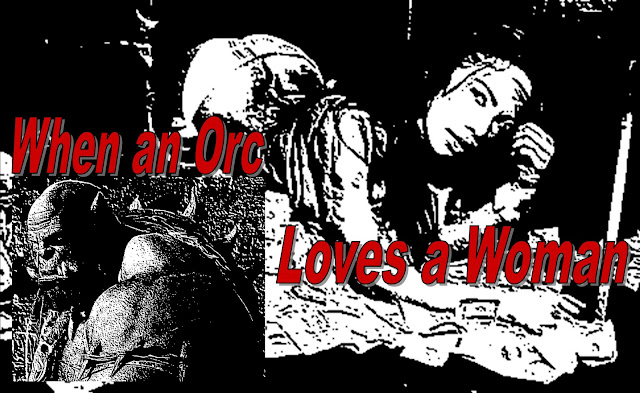 Dionne laid in bed thinking.  She hadn’t slept much since sending Crag out of her door.  She knew it would be better to not have someone like that under her roof.  She couldn’t help, but think she threw him to the wolves somehow.  Sure the orc was strong, but she doubted he could withstand bullets.
Dionne couldn’t get memories of Andre Senior out of her head.  What if they traced the killing back to Crag?  There would, of course, be a struggle and shots fired.  He would go down fighting, but he would go down.  Dionne didn’t even know why she cared.  It wasn’t like they shared a tender moment.  He quickly proved he was just like the males of her own race.  But there was something… something that compelled her to think about him… to care about him.
Dionne swung her legs out of bed, but the rest of her stayed in bed reveling in the comfort of the cotton sheets.  She felt the drifting cloth as it followed in the wake of her legs moving.  Carefully she moved the sheets over her skin.  The feather light feeling traveled up her legs, between her legs, over her newly hardened nipples into her face with a flush, then down her spine registering back to her buttocks and vulva with a solid need for something hard.
She felt her vaginal muscles clench on an imaginary Crag as he filled her beyond the point anyone ever had before.  Dionne remembered his penis as it hung as low as his voice with veins that rose like mountain ranges leading to his foreskin fortress protecting the head of his penis.
She imagined clenching his huge muscles while he subjugated her one stroke at a time.  ‘On my honor, I have never mated a female against her will’ he said in her head.  Dionne smiled and imagined saying, ‘This is completely by my will.’  Maybe that’s why she thought of him.  Despite having normal male instincts, he chose not to let them rule him.  He could have easily taken her and who knows Dionne might have even enjoyed it, but she would have felt wrong afterward.  He knew that and didn’t pursue it even though she had expressed hunger for him.
Her real fingers teased and rubbed at her clitoris as she let her mind drift further into fantasy.  She imagined what he would look like when he reached climax.  She imagined his eyes going wide; his under bite jaw extending like the maw of a great cavern; the roar of his orgasm like a thousand lions; the flood of his semen completely filling her vagina.  Her muscles clenched tightly in a simultaneous orgasm with imaginary Crag and felt the flood of juices leak from between her legs as she moaned softly and contentedly.
She didn’t mean to, but she passed out in the same position with her legs still hanging off of the bed.

Just past noon, Detective Jane Hunter knocked on Dionne Jenkins’ door.  She should have been home, she worked last night.  Dionne answered the door wearing a red silk kimono and apparently nothing else.  Hunter caught an accidental flash of coffee colored upper thigh as Dionne swung the door open.
“Can I help you?” Dionne asked.
“Are you Miss Jenkins?” Hunter asked.
“Missus, yes.”
“My name is Detective Jane Hunter.  May I ask you a few questions?”
“Sure,” Dionne said this and didn’t move to let the detective into her house.
“Could we go inside?”
Dionne crossed her arms in front of her and stood taller in the doorway.  “I would prefer we didn’t.”
“Fair enough.”  Hunter wasn’t intimidated, but didn’t want to push.  “First, what happened after you got off of work two days ago?”
“I left work and went home.”
“Do you recall interacting with Tobias Smith before going home?”
“Tobias… you mean Creepy Toby?”
“That seems to be the nickname for him,” Hunter said.  “Did you see him after work?”
“Wasn’t my choice, but yes.”
“What do you mean?” Detective Hunter asked.
“I’ve told him repeatedly, I’m fine giving him lap dances on hours, but there is a rule against fraternization outside of work.”
Hunter scribbled into her notebook.  “Where is your car?”
“What do you mean?”
“Your car, license plate L0K-T4R.  You don’t have a garage and I don’t see it on the street.”
“Funny you mention it.  Freak accident, the light pole I parked next to collapsed and crushed it.  I took it to the shop to see what they could do, but it’s probably toast so I’ve ridden to work with Arnie.”
“That is Arnold Park?”
Dionne nodded.  “Yep.  Anything else?”
“Eye witnesses say they saw a large brown skinned man attack Mister Smith.  Can you tell me about this?”
Dionne shrugged.  “Maybe it happened after I left.  The light pole crushed my car and I left after that to head home because I didn’t want to deal with it and Toby at the same time.”
Hunter scribbled in her notebook.  “I see.  Do you know anything about the blood spatter on the concrete?  It was more of a gush really.  The tests reveal it was Mister Smith’s blood.”
Dionne put her hands to her mouth.  “Oh!  That’s so terrible.  Poor Toby!”
She’s a good actor, Hunter thought to herself.  “This comes as a shock to you?”
“That he’s dead?  Certainly, but I’m not surprised.  He rubbed people the wrong way a lot.  People don’t take kindly to that around here.”
“Did he rub you the wrong way?”
“He got a little handsy when he came to the Palace.  I had to keep telling him the rules, ‘No touching’, but it was never anything more than pinching my ass occasionally.  A girl’s gotta know what battles are worth fighting in my business and that wasn’t one of them.”
Hunter scribbled more words into her notebook and nodded.  “I definitely understand there.  Hard to distinguish true sexual harassment from just a guy being a regular jerk especially working as a dancer.”
“You get any of that as a detective?” Dionne asked.
Hunter nodded.  “Yeah, not so much the sexual harassment because the guys know I’d shoot them in the balls, but definitely a station full of jerks.”  Hunter closed her notebook.  “I think that’s it for now.  I’ll be back Mrs. Jenkins so please let me know if you’re going to leave town.  Okay?”
Dionne nodded.  “Yes, I will Detective.”
Dionne decided in the instant of closing the door that she had to find Crag.  If Hunter found him, he wouldn’t know he couldn’t reveal the details of Toby’s death as he might in his realm.  He would be proud of the kill even to the electric chair.
“Shit,” Dionne said stalking across the house dropping her kimono in place of tight jeans and a black tank top.  She had no idea how to find the orc.  He didn’t know anyone in the city last she knew, but he may have run into the wrong element.  The city was too big to go house to house.
Dionne picked up a newspaper and read the police report section:
Large black male reported to be loitering aggressively in Nature Park.  Police gave chase.  Suspected same male later approached.  Suspect assaulted police on Street Avenue and fled.  Police gave chase, but were unable to catch the assailant.  No usable identification was made.
Dionne closed the paper and set it down.  “No usable identification?  They must have tried to describe his face and been laughed out of the building.”
Dionne grabbed her jacket and slipped bus fair in her pocket.  The bus pulled up in front of Dionne.  She slipped bus fare into the collector, grabbed a transfer and took a seat, staring wistfully out the window as the bus rolled downtown.
She exited the bus downtown and entered the bus marked Street Avenue.  The new bus dropped her off in front of a coffee shop with a boarded up window.
Dionne murmured to herself, “Well, I guess I start here.”
Email ThisBlogThis!Share to TwitterShare to FacebookShare to Pinterest
Home
Subscribe to: Posts (Atom)